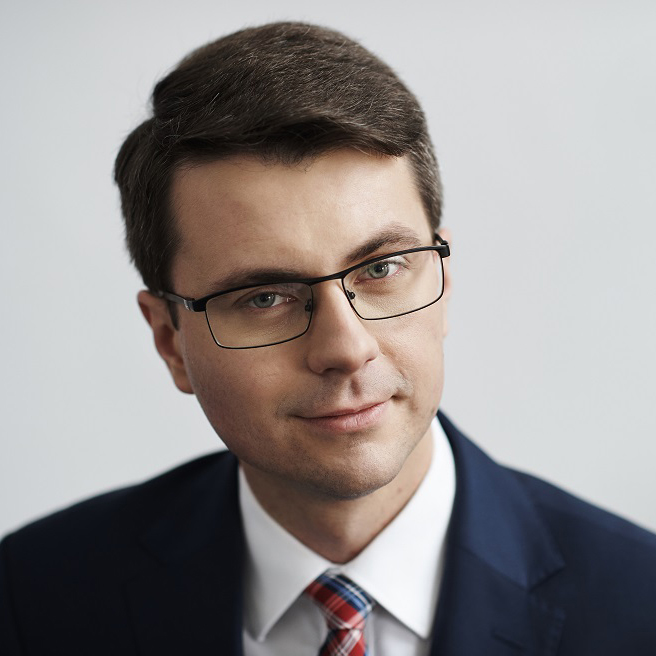 Lawyer, graduate of the University of Warsaw. He studied at the College of Inter-Faculty Individual Studies in Humanities and Social Sciences, University of Warsaw.
During his university studies, for a two-year term, he served as the President of the Board of the Self-Government of Students of the University of Warsaw. Next, he was elected by the representatives of the self-governments of Polish university students the President of the Parliament of Students of the Republic of Poland – the organization which, by virtue of law, represents all Polish students. He served as expert at the Polish Accreditation Committee (PKA) and the member of its Presidium (2013-2014). Between 2010 and 2014 he was the member of the Senate of the University of Warsaw where he served as the member of the Legal and Bylaws Committee and the Financial Committee. Between 2012 and 2016, he was the Board Member of the University of Warsaw Foundation. In the past, he also held the function of Board Member of the Foundation for Quality Assurance (FJK), member of the Committee on Student Loans and Credit Facilities, member of the Disciplinary Committee for Academic Teachers at the Main Council for Science and Higher Education, member of the Executive Board of the Open and Multimedia Education Center, University of Warsaw.
Between November 2015 and April 2017, he was the advisor to the Vice-President of the Council of Ministers, Jarosław Gowin and next became the Head of the Office of the Minister of Science and Higher Education. In February 2017, he was appointed member of the legislative team established to prepare the new bill on higher education and science. Since April 2017, he has been the Head of the Minister’s Office at the Ministry of Science and Higher Education, responsible, among all, for liaising with the Polish Sejm and the Senate of the Republic of Poland, for building the image of the Ministry, for managing promotion and information policy, including media policy, and for internal and public communication of this body.
In the past, he was the research fellow of the following institutions: President of the Council of Ministers, Minister of National Education, Lesław A. Paga Foundation.