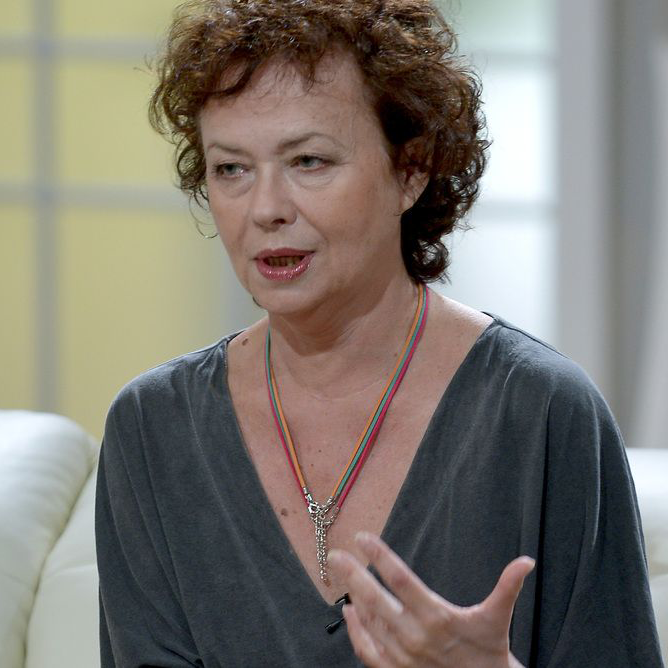 Joanna Szczepkowska (born on 1 May 1953, in Warsaw) – Polish theater, movie and TV actor, writer and columnist, teacher; in 2010, the president of the Polish Association of Stage Actors (ZASP).
She made her debut during her studies, in the Three Sisters staged for the TV Theater series. She had appeared for the first time on the TV screen in Czterdziestolatek [The Fourty-year-old] series (first episode), directed by Jerzy Gruza and based on the script by the director and by Krzysztof Teodor Toeplitz. In 1975, she graduated from the National Academy of Theatre (PWST) in Warsaw and played a leading role in Con amore movie (directed by Jan Batory). Her performance was honored in 1976 with the Best Debut Award.
Between 1975 and 1981 she was the staff actor at Teatr Współczesny in Warsaw, and in the following years at Teatr Polski (1981–1988) and Teatr Powszechny (1988–1992 and since 2000). She made performances in dramas (Rome and Juliet, King Lear, Uncle Vanya, Amy’s View) and in comedies (Maidens’ Vows, The Lesson, The Merry Wives of Windsor). She also appeared in several dozens of TV theatre productions (among all in The Skiz by Gabriella Zapolska).
On 28 October 1989, during the broadcast of the Evening News she announced: “Ladies and Gentleman, on 4 June 1989, communism in Poland had come to an end”. The recording of the statement is available on YouTube. It has become the symbol of transition which took place in Poland after parliamentary elections of 1989 – the first (partially) free elections after the end of the Second World War.
In 1997, she published the volume of poems Miasta do wynajęcia [Cities for Rent], and the same year she wrote the monodrama Goła Baba [The Naked Woman]. In 1999, she started permanent cooperation with Wysokie Obcasy weekly. Columns written as part of this cooperation were gathered as independent collections: Drugie podwórko [The Backyard Behind] (2000) and Sześć minut przez czasem [Six Minutes Ahead of Time] (2004). In 2003, she published a collection of stories Fragmenty z życia lustra [Excerpts from the mirror’s life].
By the decision of 12 December 2006, she was awarded by the President of the Republic of Poland, Lech Kaczyński, with the Knight’s Cross of the Order of Polonia Restituta. The decoration ceremony took place on 3 May 2007.
On April 2010 she was elected the president of the Polish Association of Stage Actors (as the first woman on this position).